I had my whole Friday planned out.  I had already finished a transcription job and started another, but wanted to take a break and get some fresh air.  My garden beds were in sore need of attention, so I hooked Abby up to her lead outside and began weeding and pruning.

The Rose of Sharon that is near our backdoor had grown out of control, and despite the fact that it’s about to bloom, I decided to take out the hedge trimmer and give it a good cut. Armed with gloves and my ladder I began the task of taking about 2 feet off the top. I was almost done when the trimmer got caught on a branch and began falling. I think I tried to catch it but I’m not sure how exactly it happened.

All I know is that in the next moment I watched my finger get mangled in the teeth of the still running blade. It was about 1:15. I calmly got down off the ladder, went inside the house and started running my hand under water. As I watched the blood pumping out and filling the sink, I knew I was in trouble. I grabbed paper towels and wrapped them around my fingers. I knew I had to go to the hospital. I called The Man who was at least an hour away and left a panicked voicemail. I put the cat in the living room, ran up to the third floor of the house with Abby panicked and following, closed all the puppy gates and bedrooms, grabbed my purse, gave her a treat, and drove to the hospital as the paper towels saturated through with blood.

The hospital is exactly a mile from our house but I swear it took forever to get there. There was no parking in the ER lot so I had to parallel park on the side of the building and walked in the wrong entrance. I calmly asked where the ER entrance was, not realizing I was shaking violently. The receptionist gasped and ushered me to the entrance of the ER.

The triage nurse kept telling me how brave I was as I told her I was going to pass out. My blood pressure was around 85/60, and that’s after that horrible cold, muffled feeling of passing out began to subside.

I didn’t have to wait very long to see the PA, and it turns out I know her through my work at the university. I have to say seeing a friendly face put me at great ease. I even managed to take a “selfie” of my gauze wrapped fingers. I still hadn’t seen the damage. I knew my finger was still attached, but I didn’t know how bad it was, and the pain didn’t give any indication until fifteen minutes or so after getting into a room and the adrenaline of getting myself to the hospital started to wear off.

The Man arrived in record time, shaking his head, asking about nerve damage, and telling me I was never to touch a power tool again. It was then that I realized how terrified Abby must be, that my hand was covered in blood, and there were spurts of it on my shirt as well. The PA liberally numbed my fingers – in addition to lacerating my pointer, I had nicked my middle finger as well.

The good news is I didn’t get the bone, and probably missed the tendon. I did need four stitches, though, because as she washed the wound out, according to The Man, the skin was flapping. Armed with a bandage, splint, tetanus shot, and scripts for antibiotics and pain killers, I went home. I have to follow up with my primary care, and see a hand specialist. I still can’t feel half the finger and can’t reach for anything with my whole hand or I get a searing, electric pain shooting through the finger. 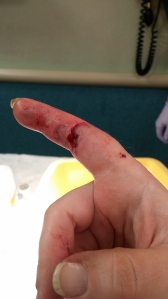 But I’m lucky.  The weekend I had so many plans for has been spent trying to avoid anything involving my hand, which is unfortunately my dominant hand. I’m terrified about permanent damage, and feel mostly helpless. I can barely fold laundry, have to eat and drink left handed (which is amusing), and can’t start my car. If I don’t get feeling back, I’m not sure how well I’ll ever be able to crochet again. But at least I still have my finger at all. My advice? Pretty common sense…  Don’t be rushed or careless with tools. Don’t wear damp gloves while using tools. And don’t try to catch a hedge trimmer.

Keep me in your thoughts, dear readers.

And in other news…

Restoring Life blog is a participant in the Amazon Services LLC Associates Program, an affiliate advertising program designed to provide a means for us to earn fees by linking to Amazon.com and affiliated sites.