It has been a crazy few weeks here at casa de restoration (it sounds good but I didn’t take Spanish so that is probably wrong…) and I can’t wait to share with you the recent crazy!

Last week, The Man turned 31  so I took off Monday and Tuesday to celebrate. And by celebrate, I mean he had drill on Saturday and Sunday and we didn’t get to do anything, and we spent Monday and Tuesday attacking the gardens! I would say that he was disappointed, but after a weekend at drill, he seemed happy that we went out for a birthday sushi lunch pre-gardening.

The amount of gardening refuse we accumulate whenever I decide I’m going to garden “just for a little bit” (which invariably turns into 4 hours or so) has been amazing.  I think the Man wanted to kill me last week when we had to take it to the curb. (And I think the garbage men may kill me if I continue on this trend…)

What pisses me off most is that my little yellow collapsible gardening bag was taken by the garbage men. And by taken, I mean they threw it out.  So while I am in mourning for my favorite gardening garbage receptacle, I soldiered on.

I meant to share these pics with you for Earth Day, and I missed the boat, but better late than never!  If you remember, a few weeks ago I began attacking the front of the house by removing some bushes. While the Man was at drill, the attack continued! This time, I drafted some friends.

Kat is my very tall friend who can reach things that I can’t. He is also has INFINITELY cooler power tools than I do.  While he originally came over to use my driveway with my painting friend, Julie, I innocently asked him for his opinion on removing the columns and he either a. decided I couldn’t be trusted with tools or b. figured I was just pretending to be clueless and he was going to get roped into helping anyway.

Kat was able to unscrew everything holding the columns together and find the seams to split the columns apart in about half the time it took me to get the ladder and find the battery to my drill. We already knew that the columns were not supporting anything so we were surprised to find a giant wooden 4×4 inside each of them.

Once the columns were off, we found a surprise: 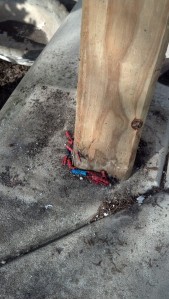 A bazillion anchors that fell THROUGH the columns when the Man and I tried to attach a flag holder to it. After the third time the flag holder came loose on a windy day, my hatred of the columns was confirmed, and the columns’ death note was signed, sealed, and delivered. I cannot tell you the squeals of joy that erupted from me as the beams came down. And the transformation is truly amazing.

Rest assured, there is a master plan to this transformation, albeit a slow going plan. However, I’m already in love with how the front of the house is opened up. The columns just don’t go with the period of our house, and now we had room to put our bench on the front steps, which I’ve wanted to do since we scored it at an estate sale the summer we moved in.

Monday and Tuesday moved to tackling the ivy in the backyard. And by tackling, I mean I have a vendetta against the ivy. 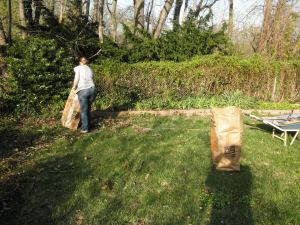 When we moved in the house, we had no idea that the pavers along the back of our property existed. Why? BECAUSE THEY WERE EATEN BY IVY. One of the reasons I hate the ivy so much is because we have gorgeous day lilies and yucca plants that were so overgrown you could barely see them.  While I made a lot of progress last year, it truly is a battle to get to the ivy roots and remove them without damaging the other plants. Over the fall the ivy started creeping back over the pavers, but after a few hours of work, I think it came out pretty good!

I have to say that removing the ivy is backbreaking, but the satisfaction afterwards is immeasurable.

All in all, the 4 day gardening extravaganza was a success.  AND I’m very excited because I finally get to use our rehabbed wheelbarrow (a $5 score at an estate sale!).

And when all was said and done, I finally sat back and relaxed.  As the two year anniversary of being in the house looms, I can’t wait to show you the continuing projects, inside and out. If you had told me a few years ago that this is what I would be getting joy from, I would have told you that you were crazy.  But here I am, and I couldn’t be happier with the house, and myself.  Happy belated Earth Day!

And in other news…

Restoring Life blog is a participant in the Amazon Services LLC Associates Program, an affiliate advertising program designed to provide a means for us to earn fees by linking to Amazon.com and affiliated sites.